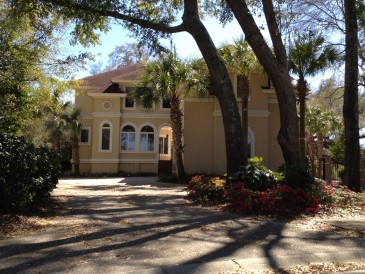 It’s hard not to be happy on Kiawah Island, a private, gated community with a stretch of unspoiled beach that offers a lush retreat from reality. In 2012, Coastal Living magazine ranked Kiawah Island No. 1 on its list of America’s Happiest Seaside Towns.

This barrier island has fewer than 2,000 residents but is well known as a spot for world-class golf, celebrity retreats and vacation homes at their finest.

Kiawah Island has more than 10 miles of beach and dunes that serve not only as a place for public enjoyment and recreation, but also as a habitat for plant and animal species and as a nesting site for sea turtles and shorebirds.
Part of the Charleston County Parks system, Beachwalker Park is located on the west end of Kiawah Island. It provides the only public beach access on the island. Lifeguards are on duty seasonally in a designated swimming area.

Kiawah Island is named for the Kiawah Indians who inhabited the island in the 1500s. By the 1700s, the land was privately owned, passing down through generations of the same family. In the early 1900s, the island was sold to a lumberman for $125,000. Logging roads were built on the island, and oceanfront lots were sold for $10,000 each.

The Kuwaiti Investment Corp. purchased the island for $17 million in 1974 and development of the island began in earnest. The island changed hands again in 1988 when Kiawah Resort Associates purchased it for $105 million. That same year the town was incorporated.

Since then it has become a vacation and second-home destination. Kiawah Island Golf Resort is home to The Sanctuary, an award-winning luxury hotel and spa, and five championship golf courses designed by Pete Dye, Jack Nicklaus, Tom Fazio, Gary Player and Clyde Johnston. The Ocean Course – with views of the Atlantic Ocean from all 18 holes – hosted the PGA Championship in 2012.

For those who prefer less upkeep, Kiawah Island also offers one- to four-bedroom residences, many designed in a style reminiscent of turn-of-the-century seaside cottages.

All property owners – whether full- or part-time residents – are members of the Kiawah Island Community Association, which exists to preserve and enhance the quality of life and property values of its members.
Students living on Kiawah Island attend Charleston County schools located on nearby Johns Island.

Whether exploring the beaches or the untamed habitats that provide a home for deer, bobcats, gray foxes, raccoons, river otters and ospreys, Kiawah Island has plenty of recreation opportunities. Some 30 miles of paved biking and hiking trails link the community, winding through the island’s many parks and nature preserves. Bohicket Marina, which offers fishing, boating and other water recreation opportunities, is located just outside the gate.

For a night out, residents can head to Freshfields Village, located at the crossroads of Kiawah, Seabrook and Johns islands. Freshfields Village has a grocery store, boutiques and restaurants. It also hosts a number of summertime events, including concerts, outdoor movies and a farmer’s market.